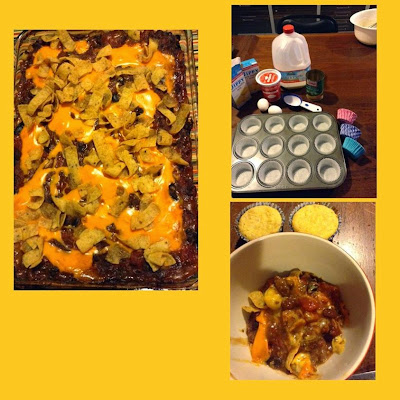 Original recipe said it serves 4 people but our family of 5 ate the whole updated Marksville Style batch so if you have big eaters you are going to want to double or use my recipe.

How to Make It

Posted by MarksvilleandMe at 9:18 PM 12 comments:

With having Fibromyalgia I was looking for a recipe that would make my life a little bit more easy , not having to spend so much time in the kitchen on my feet and moving around. Being able to provide my family with a nice meal is something I want to do, but something that doesn't get done as often because I am just in too much pain to stand there to get it all done.
I have been looking for a great Crock Pot Mac & Cheese for quite some time, and I think I came up with our own. Most other recipes left my macaroni like mush but I decided to try one more time so I took a little from here, a little from there and finally settled on the below recipe.
Mac & Cheese in the Crock Pot Marksville Style
1 lb of  elbow macaroni uncooked
8 oz of shredded cheddar cheese
1 8oz block of cream cheese cut into cubes
4 cups of milk
First spray your crock pot with non stick spray
Add in uncooked macaroni, milk, chunks of cream cheese, then shredded cheddar cheese, give a quick stir if you like but we didn't stir ours until ready to serve and it came out well.
I did this on low for 4 hours in my 5 quart  crock pot. We didn't add any salt and pepper but if you like you can.
Our family likes the little crispy edges which this does for us. I will update with a picture the next time I make it. It was gobbled up that fast which means it is a keeper.
Posted by MarksvilleandMe at 2:47 PM 4 comments:

With berries coming in season it is time for fresh shortcakes.

My favorite is Strawberry Shortcake.

This recipe is quite easy!

I take a cake mix this time it was vanilla, but chocolate is great also.

While the cake is baking I cut the strawberries and mix them with the blueberries.

Depending on the sweetness that we want I sometimes sprinkle the strawberries with a tiny bit of salt and add just a tad bit of water but with the sweetness of the cake it wasn't needed this time.

Once the cake was cooled we piled on lots of fruit and added whip cream to finish it off.

I have yet to master making my own whip cream so I just used the kind you find in the freezer section.

There you have it Easy Fruit Shortcake Marksville Style.

Posted by MarksvilleandMe at 10:12 AM 8 comments:

Usually it takes hours to make my chicken and dumplings from scratch but on rare occasions I will go the easy route which is the recipe below. The ingredients change depending on what is on hand.

I took a big pot and put in
some fresh mushrooms that I sauteed in a bit of olive oil with kosher salt
then 2 cans of chicken broth
2 chicken flavored bouillon cubes
some water
left over cut up grilled chicken breast
cut up left over baked potatoes
and two cans of mixed vegetables.

Once it was boiling I made my dumpling recipe I just use the Bisquick recipe but I put in spices that I think will complement the meal.

Instead of taking hours to make my own stock I had a meal that my family still enjoyed in about 45 minutes. Win-win for everyone.

Posted by MarksvilleandMe at 10:00 AM 3 comments:

I know others have posted pizza dip recipes, and I looked up a bunch till I found out more about how to prepare and then did it up Marksville style. Some use crockpots, microwaves, stovetop, or even ovens. I chose oven. 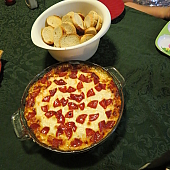 Directions:
1. Preheat oven to 400 degrees F.
2. Spread the cream cheese over the bottom of a 9-inch pie plate. Top with  ½ cup of the shredded mozzarella and ½ cup of the Parmesan cheese.
3. Spread the pizza sauce on top of the cheeses, and then top with the remaining ½ cup of mozzarella cheese and ½ cup of Parmesan cheese.
4. Top with pepperoni slices.
5. Bake until the cheese is melted and bubbly, about 20 minutes. Serve with toasted baguette slices.

You can always add olives, green peppers, ham, pineapple or anything else you might like on your pizza on top. Use your imagination. All I can say is that my family gobbled this up and have been asking for me to make it again.

Posted by MarksvilleandMe at 1:03 PM 13 comments:

I originally posted this recipe on November 24th 2011, but thought I would bring it over to my permanent website to share with all of you.
As written on November 24th, 2011.
When the other pies were done Deanna and I set out to make our own Apple pie. I haven't made it in sometime and tweaked it a little hope you all like it you will find the recipe below. My mother in law stopped over a few weeks ago and said something about her pie coming out soupy. I couldn't imagine how she did that, because her pies use to look gorgeous, at least that is how I remember them from when she use to throw the Thanksgiving Parties. Her crust was OK, I like the one I was taught to make as a child better, but really in the grand scheme of things I don't care if it is frozen, from a box, or homemade. Apple Pie is about one of the best pies out there. As soon as she said she used Macintosh I knew what the problem was,  Macintosh are not for baking, unless you want applesauce or apple-butter that is. I probably should have said something to her, but she is older then me and I didn't want make her feel bad about it. Now I used Golden Delicious below but you could really use any good baking apple to achieve the same results.
Just before we were getting the top crust on the pies, Dorothy came down so we got a few pictures of her helping out too. Well I have to go and get the stuffing ready for my bird so it can go into the oven as soon as the pies are done and then it is time to prepare the sides for dinner. Buke and Taylor are hosting their very own Thanksgiving at their home with all of Bukes friends who don't have a place to go this Thanksgiving. I sure raised him good. I would have loved to have them all here, but we hardly have enough seats for us. Next year for sure we are investing in some chairs and tables come spring time so that when we have a get together we have enough seating for everyone, plus some. OK off I go.

My girls have grown so much since this post was done, but the recipe still stands. Matter of fact there are two apple pies in the oven right now for us to devour later. We have a bigger table now, and enough chairs for everyone. We have also upgraded our stove and refrigerator since this was taken as well as repainting the kitchen and taking down the broken green tile. Amazing how many things change and others stay the same. Sure hope you enjoy this recipe as much as our family does.

10 large Golden Delicious Apples, peeled, cored, and cut into thin slices.
6 tablespoons of corn starch
1 1/2 cups of sugar
2 teaspoons of cinnamon
1/2 teaspoon of nutmeg
1 stick of cold butter cut into tiny chunks
4 rounds of your favorite pastry dough or store bought crusts what ever it doesn't matter.
Some milk
some sugar

2. apples in one large bowl

3. mix starch, sugar, cinnamon, and nutmeg together in small bowl.

4. poor dry ingredients over top of apples in larger bowl and mix or shake until all of the apples look yummy and are covered with the sweet covering.

5. prepare your 2 pie pans with the first 2 rounds of pastry

6. prick the bottom of the crust with a fork a few times

7. divide apples evenly between the two pie pans
8. place cut up butter all over both pies

9. place last two rounds of pastry over top of apple pies, don't forget to vent. We put a M for Marksville of course but you can even do fancy cut outs if you want.

10. brush crust with milk, and sprinkle with sugar.

Deanna pinching the crusts. Her first apple pie with mommy.
11. place in oven for about a hour, check about a half hour into baking if you need to cover edges of crust with tin foil to prevent buring. Make sure to cool for a while before serving, about 4-5 hours.

We serve ours with ice cream, whip cream, caramel, or sometimes even some cheddar cheese. Delicious Enjoy.

Posted by MarksvilleandMe at 4:22 PM 5 comments: